Posted on August 7, 2014 by pilkingtonphil

Just doing some quick house-cleaning on some previous posts. When I ran regressions plotting the money supply against the CPI I was told that I should average them over 5 year periods because this would supposedly iron out ‘volatility’ and show long-run trends. I responded in a post saying that I was dubious of this practice because I did not believe it would show long-run trends at all. Rather I thought it was being used to screw with the data. Here is a concrete example, drawing on the M3 and the CPI, showing why it is wise to be on your guard against these sorts of aggregation.

Here is the M3 money supply mapped against the CPI from 1960 until 2005 (I previously thought this data was available only from 1981 but I dug a bit more in FRED and found this longer dataset):

Looks good, right? Nice upward-sloping trend, right? Not really. Check that R-squared. It’s quite low. What might that be hiding? Well something rather serious actually. You see we had VERY different relationships between these two variables from 1960 to 1985 than we did from 1985 to 2005. The 1960-1985 results skew the other results. Here are the 1960-1985 results:

Wow! Now that is a tight relationship! Really statistically significant! If we accept this methodology of averaging to show long-run trends then this might have some purchase. But let’s maintain some healthy skepticism rather than dancing for joy just yet. After all, we wouldn’t just want to find what we wanted to find would we? 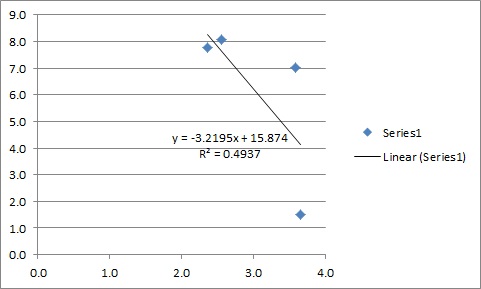 What does all this show? It certainly shows that between 1960 and 1985 there were positive correlations between the M3 money supply and the CPI in the US when we average both of those variables over 5 years. But it also shows that between 1985 and 2005 that relationship turns negative — and quite strongly so**.

The typical complaint is that the latter two regressions do not have enough observations. This is ironic coming from the same people who told us to run the so-called long-run averages in the first place as these significantly reduce the observations. But it is also highly misleading. Clearly we have two entirely different historical time periods here. When we lump them together what we get is that one time-period dominates the other and we do not get a nuanced, useful picture.

While I’d typically agree that you want as many observations as possible you can’t just throw them in the proverbial statistical blender. This can allow certain periods — or even certain datapoints — to dominate others and this can lead to a fake homogeneity in the dataset. This is one of the many dangers of averaging and aggregating.

It is a bit like if we had two countries. One had short people and the other had tall people. Then we add the average heights together from both countries and say that on average the two countries have medium height people. But this is highly misleading. In fact, the relevant information is that one country has short people and the other tall people. Ditto in the above. The relevant observation for anyone really interested in the data and not just interested in proving their pet thesis is that the monetarist correlation held in one period and ceased to hold in the second.

What can we draw from this exercise? A number of things actually. First of all, averaging statistics or taking big long-run averages can produce misleading results. Imagine we had gone with the first chart. Well, we would predict that in the next 5 years the 5 year average of the M3 would be correlated with the 5 year average of the CPI. But that was only due to a spurious aggregation. If we were forced to place a bet we would be on far better ground with the last chart plotting a negative relationship in the years running up to the most recent observation.

Seriously think about this. If I put a gun to your head and said that you had to bet your life on a horse race and you were only allowed to bet on a single horse over and over again until he won or lost (and, for the sake of argument, you could not change your bet after the exercise had started). Then I gave you data that showed that while he typically lost races in the first leg of his career which was two and a half years, he typically won them in the second leg which was two years. Would you go and calculate an average, show that he lost more than he won and stake your life on him losing? If you did you’d be a fool. Clearly something had likely changed in the physiology or the training of the horse in the meantime. Now if you had the time you might investigate what this change might have been. That would certainly be the research question that the data raises.

This ties into the second question: what do these results mean? What they indicate is that the relationship between M3 and CPI is non-homogenous over time. It changes. And, what’s more, it changes drastically. In one twenty-five year period it is positive. In the twenty year period that follows it is negative. This further leads to a provisional conclusion: it might be that heterogeneity is inherent in most economic statistics. But that is scary to the mainstream because they believe in timeless economic laws. In order to generate these laws they engage in methods like the spurious aggregation we see above.

** The positive relationship begins to break down in the post-1985 period. But it really comes unwound in the post-1990 period. If we run regressions from 1960-1990 and from 1990-2005 we get interesting results which further buttress our findings. The 1960-1990 relationship remains positive but the R-squared drops from 0.81 to 0.76. Meanwhile, the 1990-2005 negative correlation increases dramatically and becomes extraordinarily well fitted, with an R-squared of 0.97. Almost a perfect fit. This, of course, to some extent represents the smaller number of variables being used. But it still shows the dynamics of the change in the underlying nature of the data.

Of course, this is all rather silly from another perspective. If we just plot the two datapoints together on a simple line graph we can clearly see when the correlation changed by eyeballing the chart. But then we will be accused by our mainstream friends of being ‘primitive’ and so forth. This ignores the fact that people working with data for a living who actually have to get things right and are not allowed the plush luxuries of speculation in academia use such eyeballing techniques all the time to great effect. Undertaking an exercise such as the above with open eyes shows you exactly why this is.

Philip Pilkington is a macroeconomist and investment professional. Writing about all things macro and investment. Views my own.You can follow him on Twitter at @philippilk.
View all posts by pilkingtonphil →
This entry was posted in Economic Theory, Statistics and Probability. Bookmark the permalink.