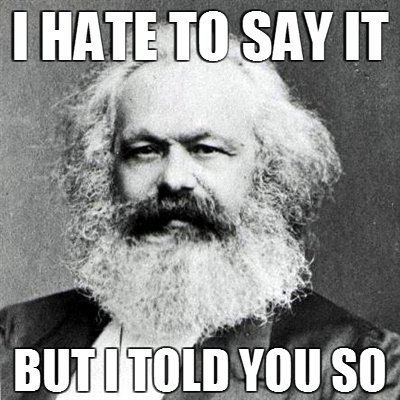 Well, it looks like The New York Times has opened a bit of a can of worms by asking Was Marx Right?. I generally find that this question to be a bit annoying. Was Marx right about what, specifically? That labour is the True and Only source of value? No, he was wrong on that. That communism was an inevitable outgrowth of capitalism? He’s been wrong on that — so far, at least. That capitalism was prone to financial crises? Yes, he was quite right about that.

I suppose I’ve made my point. Marx said a lot of things. It would be rather unusual if he were right about everything he wrote and it would be equally surprising if he was wrong about everything he wrote. Marx was right about some things and wrong about some things. Although the man had a marked tendency to play the prophet in truth he was really just a man, no matter how much some of his contemporary acolytes may insist to the contrary. He was right sometimes and wrong sometimes.

Anyway, the series gives me an opportunity to clear up a few Marxian myths. The first is propounded by Brad Delong in his piece Marx Was Blind to the System’s Ingenuity and Ability to Reinvent. It runs like this,

Marx could not fully grok that rising real material living standards for the working class might well go along with a rising rate of exploitation and a smaller labor share. Thus he takes a demonstration that labor’s share of income might fall and without noticing turns it into a claim that the working class will starve.

I don’t know why this myth continues to bounce around. Everyone and their mother seems to think that Marx was dead sure that real living standards of workers could not rise under capitalism. But this is simply not true. In Volume III of Das Kapital Marx does run through some scenarios where real wages rise and the rate of exploitation remains constant. Joan Robinson noted this in her preface to the second edition of An Essay on Marxian Economics where she wrote,

When Robinson was writing her essay in 1942 this was not generally noticed but after the 1960s I think that it was. The issue was raised in Ernest Mandel’s preface to the first volume of Das Kapital that was written in the 1970s. He dismissed it in that typical lackadaisical and lazy manner that characterises much Marxian economic analysis, but he does raise it. I don’t know why people like Delong (but also many self-professed Marxists) miss this. There really is no excuse these days. Marx did not argue that real wages could not rise under capitalism. End of story.

The second confusion arose in Doug Henwood’s piece entitled A Return to a World Marx Would Have Known. It runs like this,

How can this [i.e. the current economic situation] all be explained? The best way to start is by going back to the 1970s. Corporate profitability — which, as every Marxist schoolchild knows, is the motor of the system — had fallen sharply off its mid-1960s highs. Stock and bond markets were performing miserably.

I don’t know where this stuff comes from. I know that Marxists want to bring every crisis down to some sort of crisis of profitability but really, the data is readily available. Below are two graphs showing the year-on-year percentage change of corporate profitability in the US. On the left is the mid 1960s through to the end of the 1970s. On the right is the late 1970s through to the beginning of the 1990s.

You could probably cut this data in funny ways to try to prove Henwood’s point. But I don’t think that it would an honest approach. A cursory glance at the data suggests that looking for some fundamental change taking place in corporate profitability in the 1970s is a red herring.

Anyway, all that considered let’s reformulate the question: is Marx relevant for understanding the world today? Frankly, I don’t think so. The key problem today is that wealth inequalities are tied to financial markets. Speculation in assets is what drives most Western economies but it is also what drives the bulk of the inequality (see the work of Jamie Galbraith and his team on this). You cannot find this anywhere in Marx and it is the most pressing economic question today. Some economists are beginning to ask questions surrounding the links between income distribution and finance, but it is new territory altogether. You won’t find much of use in Marx in this regard.

Philip Pilkington is a macroeconomist and investment professional. Writing about all things macro and investment. Views my own.You can follow him on Twitter at @philippilk.
View all posts by pilkingtonphil →
This entry was posted in Economic History, Economic Theory. Bookmark the permalink.

20 Responses to Was Marx Right?