Peter Schiff, the Austrians and Their Mission to Increase US Debt Held by Foreigners Together With the Budget Deficit

Posted on October 30, 2013 by pilkingtonphil

Today I’m going to do something that I usually refrain from doing; that is, I’m going to engage with some of the crank arguments that come from the so-called ‘Austrian economists’. (Actually I have done this once before, but shhh… I’m secretly ashamed…).

I’m going to take up three lines of argument that certain Austrian pundits make that are logically connected but which do not seem logically connected in the minds of these pundits. Let us take as our sample pundit Peter Schiff, as he is certainly the most vocal and visible of the Austrians. The first line of argument is that the dollar is going to collapse because foreigners are going to dump it as their reserve currency. Schiff has been making this argument since 2003.

Tied to this is the fact that the US economy has been running persistent trade deficits for years. In the populist language of the Austrians this is registered as the US’s “lost ability to produce” which can be seen being spouted by Schiff here. According to Schiff the trade deficit will eventually lead to a run on the dollar which will then generate massive amounts of inflation in the US presumably as foreign goods and services become more expensive in dollar terms. What he is referring to, of course, is a classic currency crisis.

Now, let’s imagine for a moment that this argument holds up. Let’s imagine that Schiff is correct on the impending dollar collapse (even though he’s been wrong for 10 years running for reasons that are obvious to anyone who follows global macroeconomic events). But let’s give him the benefit of the doubt and pretend that he’s right. What is his prescription? Well, this is where Schiff’s argument goes from being somewhat grounded, if extremely misleading, to being launched right into the stratosphere and leaving reality behind: he thinks that US interest rates need to be higher and the dollar stronger.

I know… need I say anything else? Anyone with any economics training at all must be completely baffled by this argument. Indeed, I think the only reason that Schiff hasn’t been called out on it up until now is because his whole narrative has never been laid out in any consistent manner. I feel that by pointing to the obvious error here I will be patronising my readers somewhat, but I will do so nevertheless for posterity’s sake: a rise in interest rates and an accompanying rise in the dollar would severely damage US competitiveness, cause imports to rise as they become cheaper in dollar terms and cause exports to fall as they become more expensive in foreign currency terms. In a few words: the trade deficit would get much, much bigger.

In fact, as those with a more sophisticated knowledge of macroeconomics will know, this will have effects on the relative positions of the private and governments sectors too. We know this because the sectoral balances accounting identity must hold at all times. That accounting identity is as follows,

But then, perhaps we’re getting overly complicated here. Perhaps we should just stick to what is a simple point: if interest rates rise and the dollar’s value rise this will lead to a much larger trade deficit. This is not high theory either. We can simply examine the historical record in this regard. All we need to do is go back to the late-1970s and early-1980s when Fed chairman Paul Volcker raised interest rates to historic highs to fight inflation. Here is what happened.

First of all, as Schiff says, the dollar’s value increased enormously. The high interest rates in the period 1978 to 1985 led the dollar to increase in value by about 40% (all data is from FRED),

And what happened to the trade balance? Well, obviously it went massively into deficit as imports became cheaper in real terms and exports became more expensive,

Of course, this dynamic is obvious to ANYONE who knows basic macroeconomics. I’m not even talking about ‘mainstream’ versus ‘Austrian’ or ‘Austrian’ versus ‘Keynesian’. All schools of thought would recognise that an increase in the value of a currency would, ceteris paribus, lead to a deterioration in the trade balance. This is so obvious it seems embarrassing to assume that someone who paints themselves an economics expert would not realise it…

And what about our accounting identity? Did it hold in this period? Did the government deficit increase as the trade balance deteriorated? Of course it did. Accounting identities must hold! 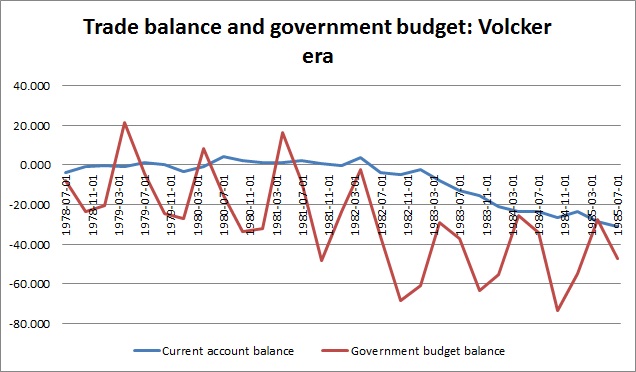 It should thus be obvious that what the likes of Peter Schiff are selling is snake oil of the highest order. They complain about the trade balance and warn that it will lead to a dollar collapse and inflation when foreigners stop “lending the US money”. But then they prescribe something that would obviously worsen the trade balance (and the government deficit).

Frankly, it’s shocking that they get away with airing their views in public without being subject to ridicule. But then, these people usually exist outside of the realm of academic economics and are not subject to basic checks and balances. Their audience are also likely not rational people so such rational arguments will not sway them. God help us all if the likes of Ron Paul get into power… although watching the confusion of the Austrian pundits as Armageddon reigned down would be rather amusing.

Update: A more thorough investigation of the logic underlying Schiff’s argument can be found here.

Philip Pilkington is a London-based economist and member of the Political Economy Research Group (PERG) at Kingston University. You can follow him on Twitter at @pilkingtonphil.
View all posts by pilkingtonphil →
This entry was posted in Economic Policy. Bookmark the permalink.

35 Responses to Peter Schiff, the Austrians and Their Mission to Increase US Debt Held by Foreigners Together With the Budget Deficit