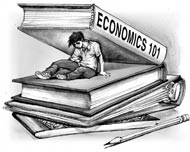 Here’s an interesting little debate from earlier this year that I came across yesterday evening. It is between a number of market analysts over whether the current stock market is overvalued. Why is that interesting? Because the argument is focused on one of the best known foundational stones of heterodox economics: the Levy-Kalecki profit equation.

Weird? Not really. James Montier, a well-known investment analyst at GMO, has been using the profit equation as central to his forecasting work for a number of years. You can see his latest offering here (page 5). Montier’s argument is that profits in the US at the moment are heavily reliant on the still rather large budget deficits that are being run there. I made a similar argument on the Financial Times Alphaville blog over a year ago.

This is actually a non-controversial point. Private sector savings are equal, to the penny, to the budget deficit minus net imports. This is intuitively obvious: when the government spends money that money either accrues to a private sector institution within the country or to a foreigner abroad. We then divide the private sector into households and firms and we quickly see that budget deficits are equal, again to the penny, to net imports, household savings and… you got it: profits.

All of this is just basic accounting. The above cannot be in any sense ‘untrue’ because this is how the accounting apparatus works. So, why is David Bianco from Deutsche Bank disputing this? Basically he confuses an accounting identity with a behavioral equation. He writes:

This construct assumes that no savings are recycled as investment. This is not a small matter. It represents a major conceptual flaw in this framework, which taints the entire analysis. The equation above would only be correct if all savings were stuck in a Keynesian liquidity trap.

Um… no. It does not assume that. The above equation says nothing with regards to how an increase in savings will effect the level of investment. It is just an accounting identity. As Keynes’ protege Joan Robinson argued many years ago in her book An Introduction to Modern Economics (co-authored with John Eatwell):

For purposes of theoretical argument we are interested in causal relationships, which depend on behavior based on expectations, ex ante, whereas the statistics necessarily record what happened ex-post… An ex-post accounting identity, which records what has happened over, say, the past year, cannot explain causality; rather it shows what has to be explained. Keynes’ theory did not demonstrate that the rate of saving is equal to the rate of investment, but explained through what mechanism the equality is brought about. (pp216-217)

If Bianco were clearer about what he was arguing he would say something like this:

This is, of course, the mainstream (pre-Keynesian) argument that assumes that, as savings increase, interest rates fall across the board and investment increases.

Note that this is a causal argument. At the point in Montier’s analysis when he summons Kalecki, he is not making a causal argument. He is just stating accounting facts. But Bianco’s argument implies that when we see increases in savings in the economy we should also see increases in investment. Does the data reflect this? Short answer: no. Below is a regression plotting gross private savings against gross private domestic investment (all data from FRED).

As you can see, the relationship is extremely weak. If I were Bianco I wouldn’t be buying stocks based on a causal argument that yields an R-squared of 0.1095.

But perhaps, it will be argued, it takes a while for the savings to transmit into investment. Nope. If we lag the investment variable by a year the outcome is even worse: we get a slightly downward-sloping line (negative relationship) with an R-squared of 0.0022.

Even more interesting is if we turn to the past 15 years. In the above regression we can at least see a positive correlation between the two variables, however weak that might be. But if we take the last 15 years we see a negative correlation implying that as savings increases/decreases investment decreases/increases.

We even get an R-squared that is a bit higher than the first regression — although I’d be somewhat reticent to bet the house on it.

Now, some people with some basic macro training may be a little confused about all this. After all, doesn’t savings equal investment? Isn’t this an identity that we are taught in the first pages of our macro textbook? This is, after all, precisely what Bianco complained about when he wrote of Montier’s analysis:

This is neither the point of the argument nor the general condition, thus the [Kalecki] equation above fails to recognize that: Investment = Savings.

But again, there is a failure to understand what is being discussed here. When we say that S = I in macroeconomics we are referring to a hypothetical closed economy with no government sector. In an economy with a government sector and an external sector this equation becomes the well-known sectoral balances identity which we can rearrange to read S = I + (G – T) + (X – M).
This explains the seeming contradiction in the above regressions. Savings do not equal investment in an open economy with a government sector at all. Rather it depends on the balances of the other sectors. But then we’re right back to where we started. We break savings down into household savings (Sh) and profits (P), rearrange and we get P = (I – Sh) + (G – T) + (X – M).
Now, if Bianco wants to bet on the US stock market because he thinks that US investment is going to increase substantially in the next few years as the government deficits decline that is his prerogative. But in doing so he must recognise that he is making a causal argument (one that is totally unsupported by the data, by the way). He believes that this large increase of savings by firms and households since 2008 will trigger a wave of investment spending in the coming years whereas Montier thinks that this is unlikely. In his latest offering Montier writes:

Given that the deficit is “forecast” by such august bodies as the Congressional Budget Office to decline significantly over the next few years, it will take either a remarkable recovery in investment spending or a significant re-leveraging by the household sector to hold margins at the levels we have witnessed of late. Thus, embedding such high margins in a valuation seems optimistic to me.(p4)

Given that corporations are currently using the cash they are accumulating to engage in share buybacks and given that the household sector has been rebuilding its balance sheet over the past few years after which we can only assume that they will be a tad more conservative in their borrowing, I think that Bianco’s argument is something of a leap of faith. But if he is correct then a major US recovery is just around the corner. Watch this space.
________________
** It is also not true that such a situation would only occur in a so-called “liquidity trap”. Even by the definition that the neo-Keynesians have given this term — which I think incorrect — a liquidity trap is when changes in monetary policy have no effect on the interest rate. But within the ISLM model investment may also be unresponsive to changes in the interest rate in which case changes in savings would not affect investment. This is what happens when the IS-curve becomes vertical and it is said that the economy is stuck in an “investment trap”.

Philip Pilkington is a London-based economist and member of the Political Economy Research Group (PERG) at Kingston University. You can follow him on Twitter at @pilkingtonphil.
View all posts by pilkingtonphil →
This entry was posted in Economic Theory, Market Analysis. Bookmark the permalink.