Unemployment and Wages in the US: A Tale of Institutional Change

Just a very short post this morning to highlight an incredibly interesting chart that I put together. Below I have mapped out year-on-year changes in wages against the unemployment rate. The results are very interesting indeed. 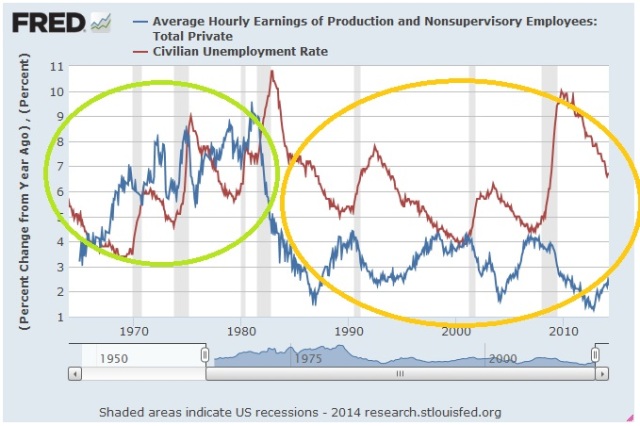 This is not to say that after 1981 wages in the US became flexible — they do not fall when unemployment rises as particularly silly variants of mainstream theory claim — but there is a strong negative correlation between unemployment and wage growth.

The reason, of course, is obvious. Union density has fallen substantially since the early 1980s as can be seen from the graph below. 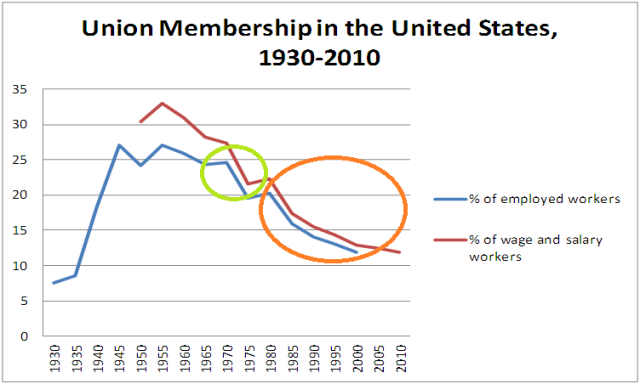 Everyone and their cat know this, of course. But I thought that the first chart was very interesting indeed. It really shows the changes that have taken place in the US labour market since 1981 in a crystal clear manner. Again, wages still grow as unemployment rises. But their acceleration does slow substantially.

Finally, let’s look at real wages — that is, wages adjusted for inflation — and how they relate to unemployment. We can see this in the graph I’ve put together below. 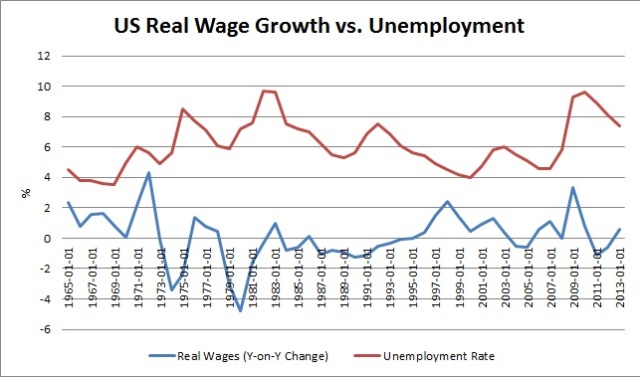 At first glance we see another “mirror-image” suggesting that there is a negative relationship between the two variables. This would seem to indicate that even in the period 1965-1981 wages fell when unemployment rose and vice versa. I would argue against this interpretation.

First of all, it is clear that until 1973 there was definitively no negative relationship between the two variables. Indeed, wages seemed to rise when unemployment rose — the opposite of what should theoretically happen in a flexible labour market.

Thirdly, if we look at the period 1975-1981 in the final chart above we see unemployment rising and real wages recovering from their trough.

The simple fact of the matter is that unemployment, when it does have an effect on wages, has an effect on nominal wages, not real wages. This is exactly what Keynes argued in the General Theory when he wrote,

But the other, more fundamental, objection, which we shall develop in the ensuing chapters, flows from our disputing the assumption that the general level of real wages is directly determined by the character of the wage bargain. In assuming that the wage bargain determines the real wage the classical school have slipt in an illicit assumption. For there may be no method available to labour as a whole whereby it can bring the general level of money-wages into conformity with the marginal disutility of the current volume of employment. There may exist no expedient by which labour as a whole can reduce its real wage to a given figure by making revised money bargains with the entrepreneurs. This will be our contention.

Philip Pilkington is a macroeconomist and investment professional. Writing about all things macro and investment. Views my own.You can follow him on Twitter at @philippilk.
View all posts by pilkingtonphil →
This entry was posted in Economic History. Bookmark the permalink.

3 Responses to Unemployment and Wages in the US: A Tale of Institutional Change