A Man’s World: Is Gender the Key Explanatory Factor Behind the Modelling Tendency in Economics? 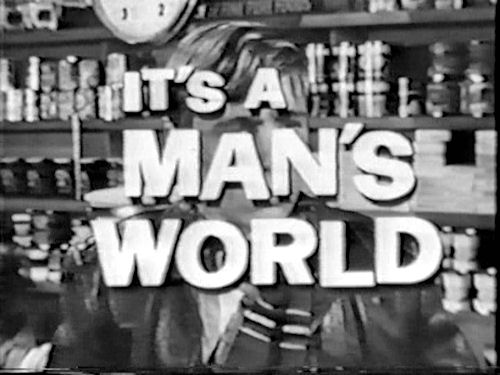 Some time ago I made a remark that the bias toward mathematical modelling in economics might have to do with the male bias of the discipline. More specifically, I argued that models provided a stand-in for the economist’s own person — their ‘I’, as it were. I then went on to write,

I got quite a few comments on this. They were all positive, all from men and all sort of said “oh, I’d never thought of that before — it makes quite a bit of sense”. Well, today I’m going to lay out the argument of the essay that I referenced. It is entitled Explaining Modern Economics (as a Microcosm of Society) and it is by Vinca Bigo.

One or two things before I begin. The essay contains quite a bit of psychoanalytical theory. Nothing too controversial, mostly object relations stuff. But I know that some people will roll their eyes and think that both the author and I are engaged in psychobabble. In other cases I might be inclined to agree. People are all too often ready to use psychological pseudoscience to simply beat up on others — I cringe whenever I hear of particular social groups being designated as ‘narcissistic’ or ‘psychopathic’. But I don’t think that is what Bigo is doing here.

Rather she is trying to understand why (mostly male) economists try to conceive of the world in what can only be described as a fantasmatic way. After all, what is a fantasy if not an act of imagining into being a world or elements of a world that have no real existence? And what is economic modelling if not this? What Bigo is trying to grasp is what emotional needs such fantasies satisfy and why these emotional needs are disproportionately found in males.

Bigo starts off by describing the idea of separation in object relations theory. It runs something like this: when human beings are babies they find it difficult to distinguish between themselves and the external world. This is extremely obvious in that human babies do not even have very sufficient control over their own limbs. Thus, the limits that I perceive on the boundaries of what is me and what is not me — that is, the boundaries between what my mind has control over and what it doesn’t — is not at all clear to human babies.

For this reason human babies psychologically perceive their primary caregiver — usually the mother — as being part of themselves; i.e. as being a component of the world over which they control. They cry for food. Food appears. They cry because they soil themselves. The feeling of being soiled disappears.

When the baby begins to become aware that a separation must take place and that the primary caregiver is actually a different person than themselves — i.e. a foreign Other — anxiety ensues. This is known in object relations theory as ‘separation anxiety’ and although it is a rather unpleasant part of the maturation process it is absolutely essential to the formation of a coherent personality. Indeed, think of the popular cultures jokes about people who never truly navigate this separation — I think here, specifically, of the character Buster in the television show Arrested Development, but this is certainly a comedy archetype.

Bigo notes that as the baby matures it often finds what are known as ‘transitional objects’. That is, objects of affection — like teddy bears or beloved rugs — that allow the child to feel like they have some control over something resembling a primary caregiver. In psychoanalytical theory such objects are manifestations of defences against anxiety. This is all quite normal so far as development goes but there are cases in which children develop fantasy reactions against such anxiety. Fantasies of omnipotence — especially concerned with the predicting of the future — are, as Bigo notes, quite common in this regard.

Anyway, Bigo goes on to apply this to the modellers. She claims that their rejection of non-modelling economics is a sort of rejection of the Other and their desire for depiction is a defence against an anxiety associated with Uncertainty. This is where I disagree with Bigo. I don’t think that there is anything particularly pathological going on here — although I think that the underlying issues are pretty much in line with what she is talking about.

She thinks that mathematical modelling is about excluding non-mathematical approaches. I think that this is only secondary. The primary reason it is so importance is because it reestablishes a relationship of total control. Much like in the case of a transitional object, a mathematical model builds a little world, a closed system, over which the modeller is omnipotent. What results therefrom is first and foremost a fantasy of control.

Again, this is not pathological per se. After all, something similar is going on when adults play with model trains sets or engage in stamp collection. These activities are in no way pathological provided they are not causing the person psychological pain — as might happen if the person became overly obsessive about stamp collection. But they are activities that probably have their roots in some sort of transitional object relation.

The problem that I would highlight is not with the psychology but rather with the economics; the economists tend to treat these little fantasies as representing reality. This is especially obvious when they apply them directly to data using macroeconometric regression techniques. This is an epistemological error bordering, frankly, on socially-sanctioned delusion.

But what about the gender question? Well this is where I fully agree with Bigo’s conclusions and will let her state her position herself as she summarises it better than I could.

Anxiety resulting from the processes of separation of the sort described above affects most, if not all, of us to varying degrees. But there is a systematic tendency for it to be experienced more starkly by boys, and ultimately by men. Gender identities are formed mostly out of family relations. Typically, the mother–child relation is the earliest most important one. Clearly,there is an asymmetry, as (usually) girls are cared for by adults of the same gender, whereas boys are not. This bears crucially on the processes of separation, or of coming to recognise and accept differences. Boys react and develop by registering their difference from the mother, and the emphasis becomes precisely that of (a sense of) separateness. This process is said to involve a degree of necessary differentiation and rejection (also involving splitting), as well as desire and/or envy.

Girls, on the other hand, in identifying with the same sex carer, will tend to develop a more relational way of being, seeking continuity over rupture. They react by perceiving sameness, and the emphasis becomes that of interdependence (association or relationality), rather than independence. Conversely, mothers are close to their infant sons, but they view their male children as different (both physically/bodily and socially, and in many ways of which they are not easily conscious), and do not share with them the same sense of ‘oneness’ that they experience with their daughters. (pp18-19)

I think that this is basically correct and explains a lot about the different (generic) psychological profiles about the average man and the average woman (exceptions are not sins, of course!). But men are far more sensitive about maintaining control over the world in a very narrow manner than women. They tend to be worse at seeing things in different and nuanced ways. And they have a marked tendency to try to provide totalising explanations so as to feel a sense of oneness and omnipotence with the world around them**.

This is, of course, where modelling in general and macroeconometric modelling in particular come in. They provide the tools to construct such fantasies of oneness and completeness. After all, a closed model has no uncertainty, nothing that is not fully understood and articulated and when it is applied econometrically the game becomes to get the highest score (t-statistic or R-squared or whatever) and thus — please note the potential double-meaning here — the closest ‘fit’ with the real world. That such an enterprise should produce nothing of genuine relevance is entirely besides the point because the point is to construct a fantasy world, not to engage with the real one.

** I do not want to be seen here as engaging in crude male-bashing of the kind so often found in feminist circles; indeed typical female psychological development leads to its own blindspots and shortcomings — it’s rather difficult to be perfect, thank you very much! What I’m really trying to point to is that in economics these male psychological blindspots have, in a sense, gone completely mad and gotten completely carried away with themselves. Some of this may be due to the tendency to exclude women from the discipline, but I think that is more so an effect than a cause; most of it is probably more so due to the status economics holds in society. Without going into too much detail, economics is something of a Totem in contemporary society and Totems tend to be obsessively and ridiculously masculine endeavors.

Philip Pilkington is a London-based economist and member of the Political Economy Research Group (PERG) at Kingston University. You can follow him on Twitter at @pilkingtonphil.
View all posts by pilkingtonphil →
This entry was posted in Economic Theory, Philosophy, Psychology, Statistics and Probability. Bookmark the permalink.

2 Responses to A Man’s World: Is Gender the Key Explanatory Factor Behind the Modelling Tendency in Economics?