Posted on February 16, 2014 by pilkingtonphil 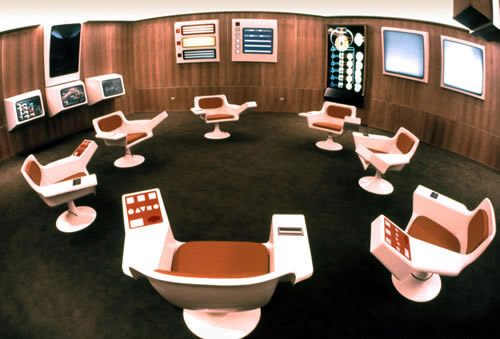 Some time ago I wrote a post on marginalist microeconomics that included a brief discussion of how it might inspire certain absurd attempts at control in an economy. In that post I was generally concerned with policymakers and managers trying to control peoples’ behaviors at a micro-level.

Obviously, being a Keynesian I have far more sympathy for macro-level approaches to economic management. I especially like such approaches when they incorporate maximum freedom for individuals to get on with their day-to-day lives — with sensible regulations in place, of course.

An interesting example of such authoritarianism applied at a macro-level are the theories of the operations researcher and management guru Stafford Beer as they were applied in Chile during the reign of the Marxist president Salvador Allende.

First a note on Beer. Beer was an Englishman and an eccentric. His work carries an obscurantist air about it. It is basically a series of metaphors describing social organisation as a sort of system. There is very little actual substance to the work — indeed, much of it is fairly dull — but it gains its colour through its metaphors. One moment social organisation will be described using the metaphor of the nervous system; the next it will be described using cybernetics metaphors.

These metaphors blend into one another almost seamlessly in Beer’s work, leading the reader to think that some sort of truth is being uncovered about reality rather than the proliferation of metaphors that is actually taking place. Here is an example of a Beer system.

As we can see this one is based on the human nervous system. What Beer is doing here is something very powerful. He has effectively — although perhaps not consciously — realised that all sciences operate on metaphor to a greater or lesser degree. And that what passes for insight in many sciences (especially social sciences) is, in actual fact, often just the effect of metaphor. What Beer did masterfully was crank his metaphor-machine all the way up and produce streams of metaphor that give off the illusion of illumination but really say nothing at all.

In 1971 Beer was contacted by Fernando Flores, an employee of the Chilean Production Development Corporation. Flores wanted Beer to come to Chile and deploy his theories in order to create a decentralised socialist economy. Beer agreed and went to Chile.

The results were absurd. I won’t go into much detail here but this short film gives an overview of how the project, entitled Cybersyn, worked. I especially like the image of the politicians sitting in the Star Trek chairs looking at graphs that were being created by humans and then projected onto the fake computer screens around them.

The project was a complete farce. As the filmmaker notes the “control room” from which policymakers were supposed to ensure that the economy was functioning had no ability to give outputs — it was just a place to sit and watch. The Cybersyn program really had very little control ability at all, rather it gave policymakers the illusion of omniscience. And why did they need such an illusion? Simple. Because the maniacal economic policies enacted by the Allende government were tearing the country apart.

During the first year of his presidency Allende had loosened monetary policy substantially and this had been accompanied by largely positive effects. He had also, however, overseen an attempt at mass redistribution of income through raising wages. The policy was not, however, accompanied by an increase in the capacity of the economy to supply the massive amounts of consumer goods that such a redistribution would require. As the government expended its foreign exchange reserves within months the economy quickly went into hyperinflation as can be seen in the following graph.

Whereas moderate inflation can actually help a developing country grow, such hyperinflation was absolutely disastrous. GDP per capita quickly sank into the ground as the social chaos unleashed by Allende’s mad economic strategy was unleashed.

Meanwhile, however, Beer and his colleagues were constructing their Sci-Fi fantasy; the Star Trek control room was even soon to be moved to the presidential palace. The motivations were obvious. Beer was a showman, not a real policymaker and what Allende and his government wanted was some sort of fantasy space where they could go to ignore the real effects that their insane macroeconomic policies were actually having on Chilean society.

The policymakers needed Beer’s control room to give them a sort of simulacrum of power. They even got an opportunity to test it out when they used the information from Cybersyn to overcome strikes that were taking place across the country. They did this by using the various Telex machines scattered around the country to find out where resources were required due to the strikes. One wonders if they could have just picked up the phone.

Where the marginalist doctrines might provide a blueprint for micro-level catastrophes, Beer’s fantasy world was effectively deployed as a sort of fairground for policymakers whose real life policies were sending a country to ruin. But both are based on the same impulse: the impulse to control; the impulse to know what makes people act as they do; the impulse to become God and create the world anew. The great German philosopher Johann Georg Hamann often said that man’s greatest sin was his desire to become God and that it was this sin that would lead to man’s self-destruction. How right he was.

Philip Pilkington is a macroeconomist and investment professional. Writing about all things macro and investment. Views my own.You can follow him on Twitter at @philippilk.
View all posts by pilkingtonphil →
This entry was posted in Economic History, Politics. Bookmark the permalink.