Updating the Technostructure: A Sketch of Galbraith’s Institutionalism with a Financial Sector

Posted on October 25, 2013 by pilkingtonphil 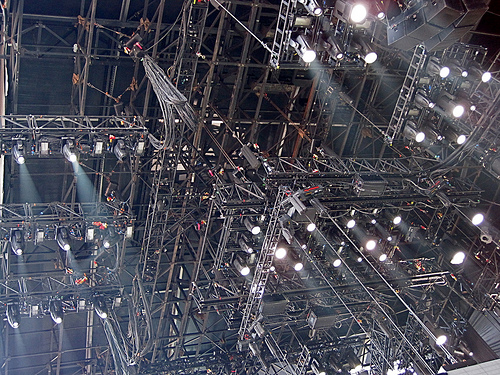 I’m currently rereading The New Industrial State by John Kenneth Galbriath. It is a very rewarding book and, despite what some have said, I do not see it as being at all outdated. I think it translates perfectly well to our contemporary world with the key difference that where Galbraith laid out what he called the ‘planning system’ — that is, corporate monopolies/oligopolies — and the ‘market system’ — that is, some primary producers — we now need to add a third sector: the ‘financial system’.

Anyway, the book is also, at points, very amusing. Galbraith is a very funny writer. In fact, one of the funniest parts of the book is also one of the most insightful. Galbraith is discussing the idea that the economy is, as it is in the marginalist models, made up of profit-maximising agents. He points out, however, that a good deal of the population who actually engage in production are working in various parts of the corporate bureaucracy — what Galbraith calls the ‘technostructure’.

The scientists and engineers, for example, are no longer like Edison or the Wright brothers, rather they are working together in a massive bureaucracy. They are devising formulas for new types of paint or rubber or metal alloy for the latest model of car. They cannot try to maximise their profits by, say, taking a breakthrough discovery to a rival corporation. Their credibility and trustworthiness would be in tatters. These people have given up the drive to maximise profits for the greater good of the company.

All that is left then for economic theory to do is to assume that corporations are maximising profits to satiate their stockholders. This, Galbraith writes, is not a very credible idea,

If the traditional commitment to profit maximization is to be upheld, [the members of the technostructure] must be willing to do for others, specifically the stockholders, what they are forbidden to do for themselves. It is on such grounds that the doctrine of maximization in the mature corporation now rests. It holds that the will to make profits is, like that of sexual intercourse, a fundamental urge. But it holds that this urge operates not in the first person but in the third. It is detached from self and manifested on behalf of unknown, anonymous and powerless persons who do not have the slightest notion of whether their profits are, in fact, being maximized. In further sexist analogy, one must imagine a man of vigorous, lusty and reassuringly heterosexual inclination who eschews the lovely and available women by whom he is intimately surrounded in order to maximize the opportunities of other men whose existence he knows of only by hearsay. Such are the foundations of the maximization doctrine when they are fully separated of power from reward. (pp148-149)

Some now claim that since Galbraith had published these lines in 1967 the revolution in finance has pushed shareholder value to the fore and that this can be used as a proxy in order to theorise the corporation as a profit maximising entity. But this is simply not true. It is all a smokescreen. Corporations do not try to maximize shareholder value at all. They continue, as they did when Galbraith wrote, to pursue whatever other ends are seen fit (growth, expansion, corporate looting etc.). They simply hide behind a veneer of stockholder sovereignty.

When these corporations do pursue higher share values they need not do so with long-term production goals in mind either. Take a look at this chart together with commentary from Byron Wien, Vice Chairman of Blackstone Group from Business Insider, 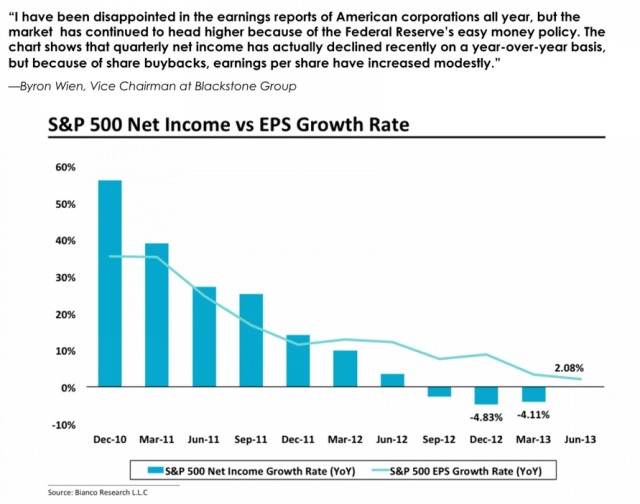 What this shows is that, as the sequestration cuts kick in, corporate earnings have actually fallen. But because the companies want to keep their stock prices afloat they just use cheap money to buy back shares and decrease the overall pool, thus increasing earnings-per-share. Such activity is certainly a far cry from shareholder value as a means for economists to theorise normal, economic profit maximisation in corporations. What we see in such examples is that share prices becoming completely detached from any notion of production or output and thus being unable to serve as a proxy for the profit maximisation theories of the marginalists.

In fact, this can be understood rather well from the framework for asset prices that I’m currently trying to get published. There I lay out a framework that allows us to understand asset prices as being, to some degree, fixed by those who issue the asset. In this, assets themselves become but another fixed or quasi-fixed price market just as they are when firms engage in buybacks to fix price and by doing so Institutional analysis of Galbraith’s type once again comes into its own.

Consider the following equation which is a stripped down version of my asset pricing framework,

Okay, so Pft is the final price of an asset at time t. While pft-1 is the price of the asset in the previous period. The lower case delta term, which looks like a small d, represents the price elasticity of demand. The term Peft stands for the average expected future price of the asset (upper-case delta [triangle] indicates, of course, change). The uppercase chi, which kind of looks like an X, stands for the relative confidence of investors in their expected future price Peft. The term q stands for the tendency on the part of the issuer of an asset to increase the quantity of that asset while the term Zt stands for the issuer’s ability to increase the asset’s issuance. When dealing with purely financial assets like shares which can be increased in unlimited quantities it is best to set q equal to one and alter the Zt term as needed. Or, 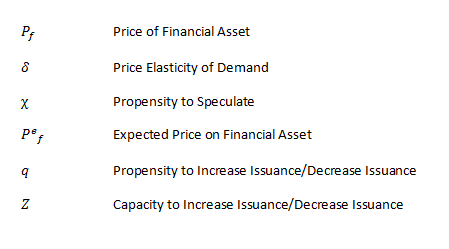 Now, imagine the situation where a company engages in share buybacks. Let us say that private investors do not wish to purchase any of the share in this period, so Peft is equal to zero. Thus, the price will ultimately be equal to the price in the previous period minus the amount of shares the issuer issues. In the case of a share buyback we might say that they destroy shares. So we place a negative number in the place of Zt which would thus raise the price of the share to the tune of the quantity bought back times the price elasticity of demand term.

Is this profit maximisation? Not really. When the Zt term is decreased a separate balance-sheet operation** occurs where cash deposits are lost and overall equity decreases — so, it is not clear that the actual value of the company has increased in any meaningful way. The effect is that the Return on Assets (ROA) and the Return on Equity (ROE) increase which give the markets a nod as this is registered as an improved financial ratio and the price of the shares consequently increases***.

Certainly, this has absolutely nothing to do with profit maximisation in the marginalist sense. It is just an accounting trick that increases the value of shares in the eyes of the market — or, at least, that’s what it’s supposed to do if investors swallow the signal created by the company. It does not increase investment or output and thus has nothing to do with producers increasing output up to the point where profit is maximised as in the marginalist story. Indeed, what the issuer of the share is actually doing is engaging in financial asset destruction to temporarily boost financial profits.

When we begin to integrate these aspects of corporate life through an understanding of asset-pricing and corporate balance sheets we can start adding on the financial sector to Galbraith’s two-tier analytical framework. After doing so I think we’ll find more and more that his criticisms of the marginalist profit maximisation framework are just as relevant today as they were in 1967 and that his framework, properly updated, will be just as valuable as it was all those years ago in understanding how our advanced capitalist economies work.

** Ideally, if we were engaged in an extensive analysis of this process we would include a Godley-style accounting matrix to supplement the algebra and bring out clearly the balance-sheet effects. The balance-sheet would, however, be slightly different to Godley’s in that it would integrate corporate accounting norms.

*** We can, however, imagine a rare case in which a share buyback does not result in increased share prices. If the company undertakes, for example, a share buyback purely to cover up extremely poor financial ratios and investors and analysts understand this the price of the shares may not rise (there are other examples which can be read about here). In the context of our algebraic framework this must be taken as a negative signal which decreases investor expectations. Thus, in the special case of a share buyback being used to cover up poor financial ratios that is recognised instantly by investors the destruction of shares is inversely related to the expectations of investors. Or, alternatively (and somewhat perversely), the confidence of investors is positively correlated with increased issuance,

Philip Pilkington is a London-based economist and member of the Political Economy Research Group (PERG) at Kingston University. You can follow him on Twitter at @pilkingtonphil.
View all posts by pilkingtonphil →
This entry was posted in Economic Theory. Bookmark the permalink.

3 Responses to Updating the Technostructure: A Sketch of Galbraith’s Institutionalism with a Financial Sector