Round and Round We Go: Krugman-Magoo Strikes Again!

Here we go again. Paul Krugman has made another, erm, innovative discovery. Apparently, Krugman has just discovered that when government deficits rise interest rates may not rise at all, indeed there may be a tendency for them to fall. Think you’ve heard this before? Well, that wouldn’t be particularly surprising if, I don’t know, you have internet access because that is the Modern Monetary Theory (MMT) argument.

Krugman then goes on to say that this proves macroeconomics wrong but as Matias Vernengo writes:

[Krugman] gets everything right, including the bold claim that mainstream macro (the only one he acknowledges, even though he knows better) is all wrong.

I don’t know exactly what Vernengo meant by his bracketed comment, so I don’t want to put words in his mouth, but for me this raises an interesting question and one that I have been wondering for some time: is Krugman a plagiarist or is he completely and utterly myopic to the point of Mr. Magoo-esque comedy?

Okay, let’s lay out the evidence. Over the past few years Krugman has been taking some positions that Post-Keynesian economists have taken for decades; literally decades. Consider that Krugman recently began to hint that income distribution might be entirely detached from what neoclassicals consider fundamentals. As I highlighted in the piece linked, Krugman gets it all wrong but he is certainly moving in what might be considered a heterodox direction. But its the occasional MMT-style comments that Krugman makes every now and then that really have me wondering what’s up with Krugman — this latest being only one of many.

“But shouldn’t we just be glad that Krugman ‘gets it’?” some might ask. No. Absolutely not. If Krugman is not citing his sources properly then he is not a real scholar. Scholars must cite their sources lest they become megalomaniacal idea-gobbling charlatans who care more about their popular image than the work they do. Think Lyndon LaRouche and his bizarre perversions of elements of Western philosophy or L Ron Hubbard and his, erm, discovery of “Dianetics”. In cases such as these not only are the ideas stolen but they are also degraded and bastardised.

Well, let’s lay out the case against Krugman to see if we can provide a judgement. Okay, so we know that Krugman is familiar with heterodox and Post-Keynesian work. The evidence for this is extensive; one could consider this awful review of John Kenneth Galbraith’s work from way back in 1996 (there is also a more recent photo where Krugman is sitting down with The New Industrial State on his desk, which I cannot find at this moment in time) or one could point to the fact that he himself claims to have read Hyman Minsky’s Stabilizing an Unstable Economy which contains discussions of endogenous money and Kaleckian income distribution dynamics. Or one could point to the fact that he is clearly aware of the MMT argument (who isn’t at this stage?).

So, there’s your evidence. I think that it’s pretty conclusive: Krugman has exposed at least his eyes to such work. The question is to what extent it penetrated his mind. Here I will lay out the only three possibilities I can think of. (Alternative possibilities are welcome in the comments section.)

(1) All the ideas contained in the work that Krugman seems to have read actually did penetrate his mind fully. Krugman is thus to be thought of as a highly competent scholar but, ultimately, a fraud. He would then be using these ideas to buttress his own standing in the media and the profession by coming to the same conclusions as heterodox economists, but then pretending to arrive at them in slightly different ways making himself appear highly original and innovative. This is the “Econburgler” argument.

(2) Same as the above, but Krugman is afraid that actually saying that he is a heterodox economist will ruin his standing. By this reading, Krugman is the humble savior of heterodoxy. He is trying to secretly package their ideas and send them, like a parcel-bomb, straight into the lair of the mainstream without their even knowing it. This is the “White Knight” argument.

(3) Krugman cannot actually read the stuff he claims to read properly or he hasn’t read it at all. By this reading, Krugman just scans books like The New Industrial State and Stabilizing an Unstable Economy with perhaps some of the material slipping somewhere into his subconscious where it might re-emerge some months later as a Krugman-original. This is the “Krugman-Magoo” argument. 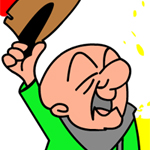 So, the court has been, as it were, in session for long enough. What is my judgement on the matter? Well, I’m of the mindset that you should never imagine a conspiracy exists where we can assume simple human incompetence. For that reason I’m going with the Krugman-Magoo argument. It seems to me that Krugman, having such a large and devoted following on the liberal-left due in part to his admirable opposition to the Iraq War and his opposition to austerity, has a bit of an ego on him. Combine this with a typical neoclassical level of acumen for scholarship and I think you get the Krugman-Magoo result.

The upside to this: if heterodox economists keep barraging Krugman with new ideas many are likely to filter into his subconscious and emerge some months later. The downside: don’t expect any acknowledgement from the ever myopic Krugman-Magoo.

Update: A commenter has pointed out that Vernengo and I misread Krugman’s original post. He did not say that macroeconomics is wrong. Well, he did but he was being sarcastic. I came at this from Vernengo’s post so the misreading spread — which is obviously on my shoulders.

The same commenter thinks that this slight misreading, of an ironic remark, debunks this post. It does not. Krugman still argues that when a recession hits and the deficit increases, the central bank steps in and holds down interest rates. You can read this here:

The recession of 1990-91 (driven by the S&L crisis and a burst bubble in commercial real estate) drove up the deficit, and also led to Fed easing.

This is not in line with Krugman’s previous arguments where he has said that the LM-curve is upward-sloping and that only in a liquidity trap can the government spend without driving up interest rates. Unless he has redefined “liquidity trap” to mean “any recession” then 1990-91 is not a liquidity trap and yet the government can still, according to late-July 2013 Krugman, spend without driving up rates. Despite my misreading of his ironic statement, Krugman-Magoo remains a wet fish, flopping around in the mud of his own lack of clarity on these issues.

Philip Pilkington is a macroeconomist and investment professional. Writing about all things macro and investment. Views my own.You can follow him on Twitter at @philippilk.
View all posts by pilkingtonphil →
This entry was posted in Economic Theory, Media/Journalism. Bookmark the permalink.

19 Responses to Round and Round We Go: Krugman-Magoo Strikes Again!